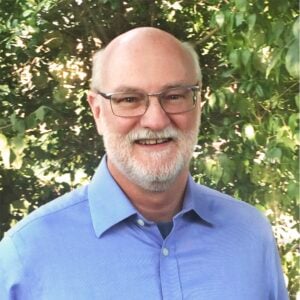 Mark Dronfield grew up in Northern Virginia attending church and youth groups from grade school on, and was active in a Bible study while in high school. At James Madison University, he made a number of lifelong friends with men who had a major impact on his walk with Jesus by actively discipling him (emerging with two business degrees was a bonus). Since college, Mark has led several small groups, Bible studies and outreach efforts with other men.

Mark and his wife Karin have been Cherrydale members for over over 15 years ago. Mark currently is involved in small groups, fills a leadership role in Cherrydale’s Prayer Ministry, and is a former Cherrydale Deacon. Most recently, he participated in the Lead Pastor search process by serving as a co-chair on the Search Advisory Committee.

Mark’s passions include studying the Scriptures to deepen his love for Jesus, continuing to grow his relationship with God through prayer, and walking out this journey with friends.

Mark has worked for the federal government for over 30 years, most of them as a Program Manager. Mark and Karin have been married for 25 years and have three college age sons: Ben, Jon and Tim.